(click for all other countries)
edition size:
image Size:
description:
345
17 x 17 in.
Signed by the Artist
Numbered Limited Edition
ships for:

about this piece
LeRoy Neiman chronicler of American history pays homage to the great emancipator, our 16th President, Abraham Lincoln. Not only are we celebrating the 200th Anniversary of Lincoln's birth but also the inauguration of our 44th President, Barack Obama.

In 1969 Neiman painted Lincoln. The painting now hangs in the Lincoln Museum in Springfield, Illinois. LeRoy Neiman was honored in this Bicentennial year with Illinois' highest honor, The Order of Lincoln. A blowup of the original painting was used as the backdrop during President Obama's televised speech.

Inspired by the Lincoln Bicentennial, Neiman painted the present portrait celebrating the President who saved the Union and formally ended slavery. The artist captures Lincoln's bone structure conveying the integrity, the very essence of an icon of strength. Staccato brush strokes and pulsating color capture Lincoln's determination and confidence. The eyes are discerning and piercing. Just as Lincoln's speeches were classics of clarity and grace, this portrait of Lincoln speaks volumes.

In HOMAGE TO LINCOLN LeRoy's quintessential vision perfectly translates the elegant nobility of the man for all seasons. 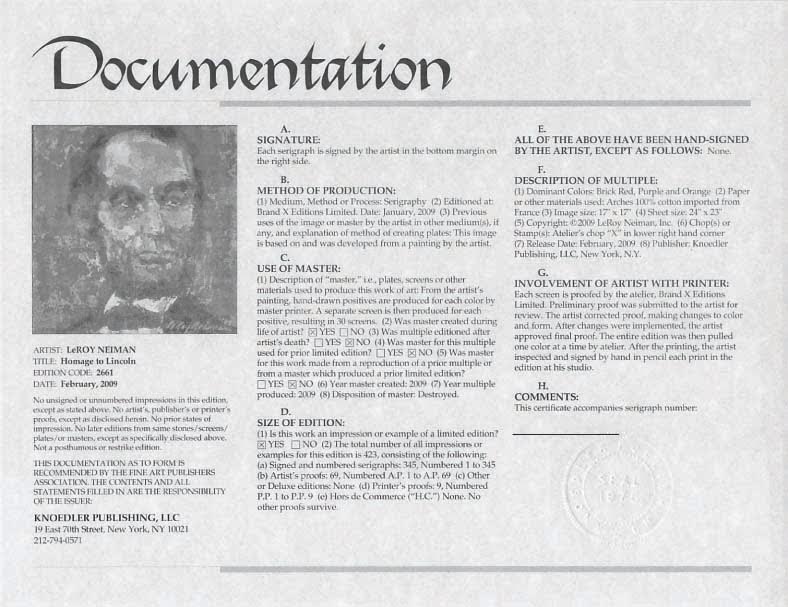 Iker
Leading The Way Giclee on Canvas
Others Are Buying

Teter
Reflections
Others Are Buying

Doolittle
Three More for Breakfast Artists Pr...
Others Are Buying