(click for all other countries)
edition size:
image Size:
description:
2
30 x 37.75 in.
Signed by the Artist
Numbered Limited Edition
ships for:
ships in:
ships via:
FREE
7 - 9 days plus transit time
Fedex or UPS
*Canadian Orders
about this piece

The guns of Gettysburg were silent. The raging battle of three days was over. The Federal Army held the field and the Army of Northern Virginia was in retreat heading south. The morning of July 4 was clear and sunny, but heavy rain would soon move into the area in the early afternoon. Col. Joshua Lawrence Chamberlain of the 20th Maine returned to Little Round Top that morning to honor and bid farewell to his fallen soldiers.

Chamberlain wrote, "We returned to Little Round Top where we buried our dead in the place where we had laid them during the fight, marking each grave by a headboard of ammunition boxes with each soldier's name cut upon it."

Chamberlain wrote of his sadness as he looked upon his men who had given all. Describing one young man he wrote, "fair young face the sweet mother-look had come out under death's soft whisper." He continued, "The men were placed in a single wide grave with touch of elbow still...in a sunny hillside nook."

We also buried 50 of the enemy's dead in front of our position of July 2. We then looked after our wounded, whom I had taken responsibility of putting into the houses of citizens in the vicinity of Little Round Top, and on the morn¬ing of the 5th, took up our March on the Emmitsburg road."

Chamberlain returned to his regiment as the rain began to fall. He was limping and hurt from injuries sustained in the battle. His left thigh was bruised where a minie' ball had struck his scabbard slamming his leg. His right instep had been cut through his boot by a piece of shrapnel from an exploding shell. It was with sadness that Chamberlain returned to his regiment. He would never forget the battle for Little Round Top nor his men who had given their lives now resting in sacred ground. this title is also available in... 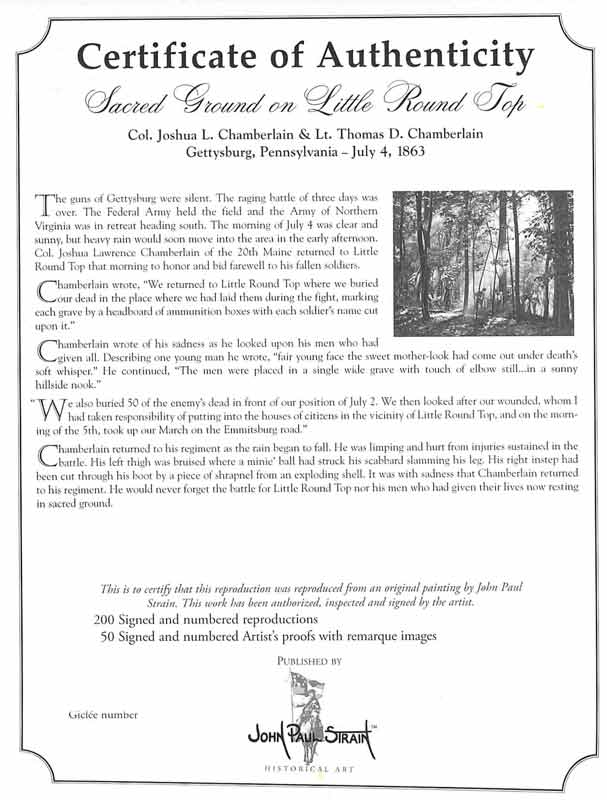 Doolittle
Three More for Breakfast
Others Are Buying

Doolittle
Three More for Breakfast - Bears Ar...
Others Are Buying